I've been looking for some new LBD blogs and groups; many of the ones I knew aren't current because the care receiver is gone and the caregiver has moved on to other things. Here are a few groups and sites I've found that you may not know about and I hope you find them as interesting as I do!
Also, there is an International Dementia with Lewy Bodies Scientific conference coming up in December in Miami that is including a two-day caregiver/care receiver track. I'm on one of the committees helping to plan it and it's probably going to be a great experience, full of the latest scientific info and research, and support. I'll be posting more about it as we get closer to the date.

http://lbdtools.com/  This one is awesome, of course.

https://www.facebook.com/groups/lyndseywilliams/ This is a closed group so you must ask to be included but it looks great. 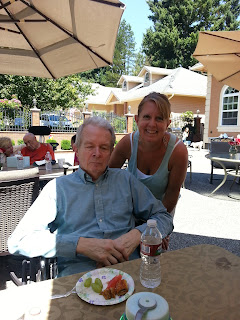 Sunday the 2nd was the 25th anniversary of my mother's death. It was a hot, muggy afternoon and evening, just like the one the night she died, and I thought about my 19 year old self, sitting on the floor by the couch where she lay, reading late into the night and watching over my mom. She went fairly quickly, but I'll never forget her last, struggling breaths - wheezing and choking. I've since learned in my training that this is called Cheyne-Stokes respiration, and it is very common before death; it is labored and gasping.

I'm thinking about this also because a few weeks ago, I was sitting with Dad and he was sleeping in his chair. He was exhausted because earlier in the morning, his caregiver had urged him to walk around the house and visit with other residents, and I think it really wore him out. Even benign activities like these can be incredibly wearing to someone with dementia, and he looked done in. His face sagged, his body twitched, and I found myself watching his chest for his next breath - not something I usually do!

It occurred to me that he could die right then, after fifteen+ years of dementia and illness, this could be it. It was unsettling. Dad has been hanging on so long that I forget that at some point, probably sooner rather than later, he's going to go. I will be happy for him when it happens since I know he wouldn't want to live like this, but it really woke me up that it could be sooner than I think, and I'd better start preparing, emotionally, for the end of my father and the end of my care of him.

Fortunately, this weekend, Dad's house had their yearly barbecue and my sister, my dad, and I were all together for the anniversary of my mom. This is not something that happens often, all of us being together, and it really made me feel good. I was glad to be with my sister and my husband and my father and all the residents of the house, eating chicken and salad and enjoying the sun. I think our lives would have been incredibly different if my mom had remained alive, but I hope she was looking down on us this weekend - glad that we were all together.
Posted by Joy Walker at 3:02 PM 11 comments: